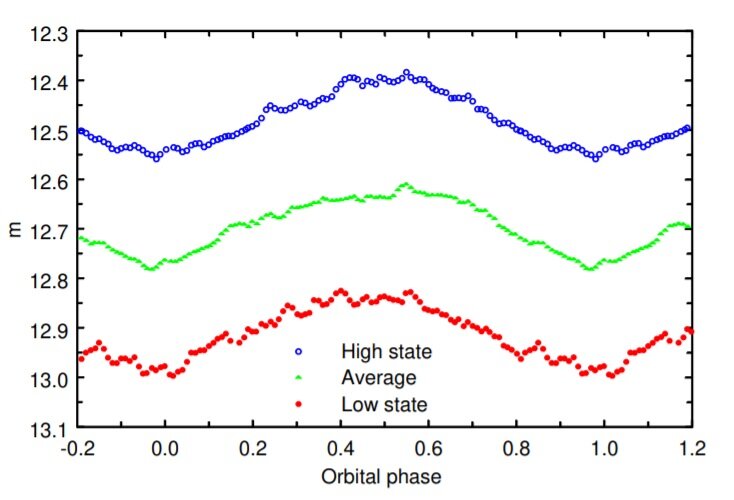 Using data from NASA’s Kepler telescope, Russian astronomers have investigated an X-ray binary known as Scorpius X-1 (or Sco X-1 for short). Results of the study, published September 2 on the arXiv pre-print repository, provide further insights into the parameters of this system.

Scorpius X-1 was detected in 1962 as the first compact X-ray source outside the solar system. Located some 9,000 light years away in the constellation Scorpius, Sco X-1 is the strongest apparent source of X-rays in the sky. The binary consists of an optically visible star V818 Scorpii with a mass of only 0.42 solar masses, and a neutron star about 40 percent more massive than the sun. Therefore, the system has been classified as an LMXB.

A group of astronomers from the Lomonosov Moscow State University in Russia, led by Anatol M. Cherepashchuk, decided to analyze the data from Kepler spacecraft’s prolonged mission known as K2. The main aim of the study was to derive parameters of the Sco X-1 system.

“We modeled optical light curves of Sco X-1 obtained by the Kepler space telescope during the K2 mission,” the researchers wrote in the paper.

The model allowed the team to estimate the mass ratio of the two components of Sco X-1, which was found to be around 3.6. According to the study, V818 and the neutron star have masses of about 0.4 and 1.44 solar masses, respectively. The system’s orbital inclination turns out to be between 25 and 34 degrees.

The astronomers assume that V818 possessed significant excesses of radius and luminosity as it might have moved in its evolutionary way and underwent a significant mass loss. They added that its initial mass should be greater than 0.8 solar masses.

“Probably, the mass of the donor star was reduced due to the mass loss from the system in the stellar wind that was induced by the strong X-ray heating. Another possibility consisted in that the star was not in the thermal equilibrium and had an excess of the radius according to its mass due to the rapid mass loss,” the researchers explained.

The study also found that during the transition of Sco X-1 from the optical high state to the low state the total optical flux from the system dropped by about 35 percent. The drop of the average flux from the donor star was approximately 5 percent, and it was about 30 percent for the accretion disk’s flux.