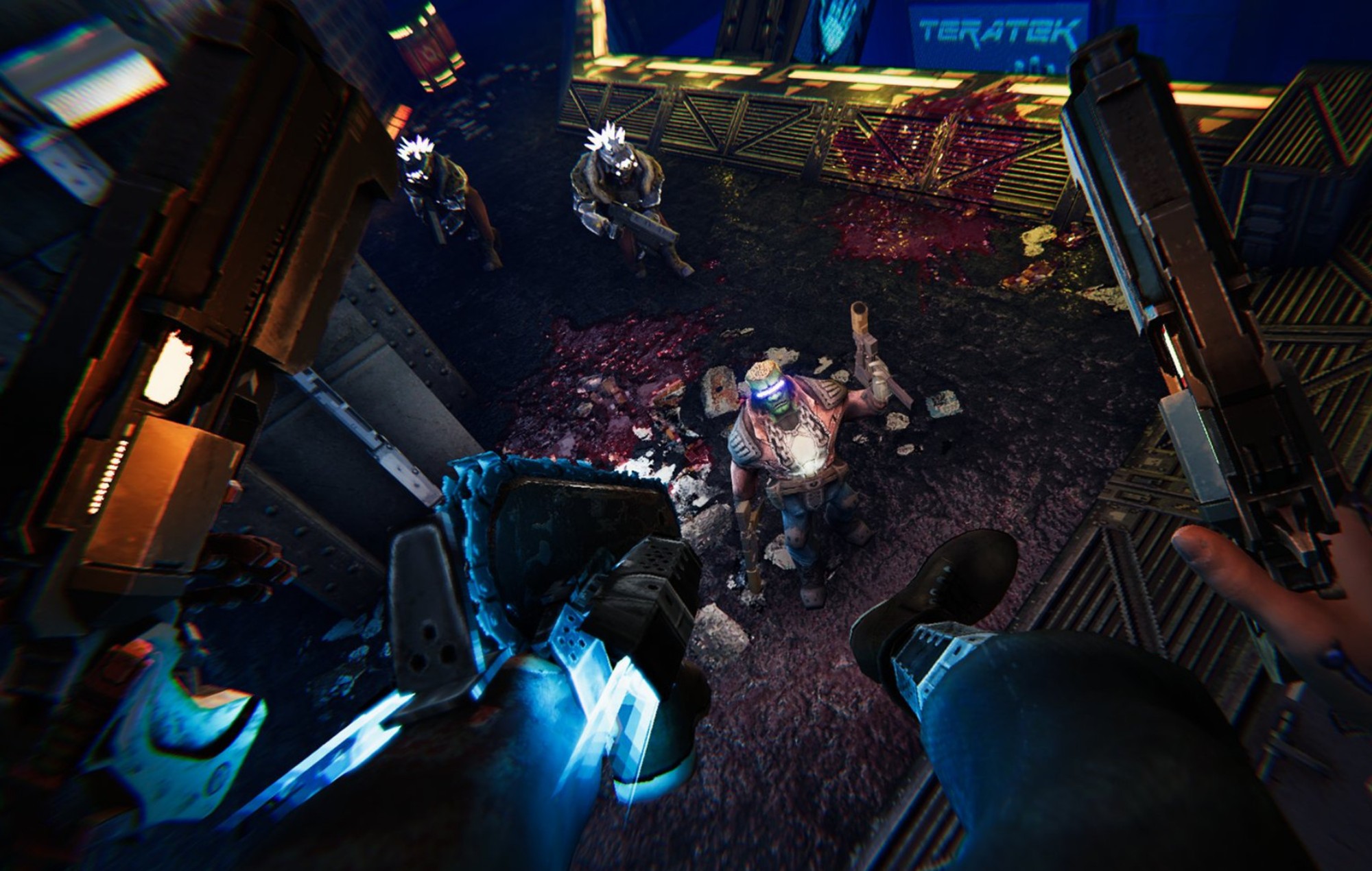 Publisher Apogee Entertainment and developer Trigger Happy Interactive have unveiled their upcoming retro-style shooter, Turbo Overkill, which aims to get a step up on its rivals by allowing players to dispatch enemies with a chainsaw hidden in their leg.

Set in a Blade Runner style neon metropolis, Turbo Overkill – as if the name didn’t give it away – is inspired by the likes of ’90s shooter classics Doom and Quake, and perhaps even a dash of Carmageddon thanks to the flying car players will be able to splatter enemies with. The game even takes a bit of a ’90s visual approach too, blending comedically pixellated gore with contemporary lighting and texture detail.

It’s the protagonist’s cybernetic augments that will catch most people’s eyes though, as they include the aforementioned chainsaw leg, a rocket launcher tucked into an arm, and a grappling hook allowing players to swing Spider-Man style through the skyline. Augments can be won from defeating bosses or bought with cash earned from dispatching enemies.

The trailer doesn’t give much away in terms of story, but the publisher’s YouTube page describes it as “Johnny Turbo needs to clean up Paradise, a cyber city overrun by augmented minions under the cult control of the world’s most advanced AI, Syn, who’s looking to expand to world domination if not stopped here and now. Wall-running, Hero-Time, chain saw leg augments, flying cars and lots of booms.”

More info can be gleaned from the game’s Steam listing, where Johnny Turbo is described as “half-metal, half-human, half-crazy”, and details that he returns to Paradise “desperate for enough money to outrun his past mistakes”, and will face “rival bounty hunters” in his quest to destroy Syn.

Given the style of Turbo Overkill, its very clear influences, and the rapid pace Trigger Happy is going for, a deep character drama or layered narrative probably isn’t in the offering though. Instead, it looks more like trappings to frame hi-octane action, insane wall-running stunts, and stupidly over-the-top attacks. The developers say “the FPS genre is about to get wild and fun again”, and for players looking for something a bit lighter, this could be worth keeping an eye on.

Turbo Overkill doesn’t have a release date beyond “SOON

” yet – yes, including the trademark –  but Apogee has confirmed the game will be heading to PC, PS5, PS4, Xbox Series X|S, Xbox One, and even Nintendo Switch.

Sticking with cyberpunk themes, a mod for Cyberpunk 2077 has made its dystopian future even more depressing by introducing health insurance.