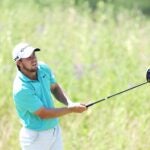 Pierceson Coody turned down a stunning sum for a chance at the PGA Tour. Now, his dream is growing closer to reality.

Some things in life can’t be bought. Like, for example, a PGA Tour membership.

Pierceson Coody knows this reality better than most. He is a superstar in the making, the world’s top-ranked amateur, grandson of former Masters champ Charles Coody — and, most currently, a minor-league grinder battling to earn a spot on golf’s biggest tour.

Of course, some professional tour memberships can be bought. But not the ones Coody has any interest in. Last week, Coody made waves when he announced he’d spurned a multi-million-dollar offer from LIV Golf in order to continue chasing the dream on the PGA Tour — and, in the meantime, play on its feeder tour, the Korn Ferry Tour.

“Seeing that kind of money was kind of a wow moment for me,” Coody said. “It was a crazy amount of money, but I love the American tour. I never saw myself as a LIV golfer, but a PGA Tour golfer.”

On Sunday, Coody’s vision moved one step closer to reality. The University of Texas grad won the Live and Work Maine Open, his first-ever professional victory in only his third professional start. Coody shot a 5-under 66 in his final round to win by five, a 20-under 72-hole total that blew away the competition in Falmouth.

As with most other stops in the life of a still-battling pro, that Coody won was ostensibly more important than how he won. Particularly considering that for those on the Korn Ferry Tour, winning is the fastest way to PGA Tour status.

I never saw myself as a LIV golfer, but a PGA Tour golfer.

Coody’s victory helped his Korn Ferry Tour ranking, which will boost his standing for the Korn Ferry Tour Playoffs, helping his odds of earning one of the 25 coveted PGA Tour cards available to the best finishers. But, of course, he might not even need to get there. If Coody wins his next start, or wins two more between now and the end of the Korn Ferry Tour season, he earns a rare automatic promotion to the big show.

At any rate, it’s good news for Pierceson Coody. The long-term goal he was willing to forego millions to achieve? Well, after Sunday, the future might not be so far away.

“No [I can’t put it into context.] Finishing first in the PGA Tour University program was in itself just such a huge goal,” Coody said. “The one day I was in Dallas before I went to the BMW, I just had breakfast with my agent, and we talked about how being in the top 75 was the big goal. That’s what we wanted, to stack some nice weeks together and see where it takes us. Last week, finishing fourth in Wichita just gave me so much confidence. I definitely felt the momentum from last week.”

James Colgan is an assistant editor at GOLF, contributing stories for the website and magazine on a broad range of topics. He writes the Hot Mic, GOLF’s weekly media column, and utilizes his broadcast experience across the brand’s social media and video platforms. A 2019 graduate of Syracuse University, James — and evidently, his golf game — is still defrosting from four years in the snow, during which time he cut his teeth at NFL Films, CBS News and Fox Sports. Prior to joining GOLF, James was a caddie scholarship recipient (and astute looper) on Long Island, where he is from.

Share
Previous China’s new aircraft carrier: Never mind the Fujian, these are the ships the US should worry about
Next Antares – Das rote Herz des Skorpions – Astrodicticum Simplex

BlackRock’s CEO Just Dumped $20M In Shares: Here’s What Happened The Last Time He Did It

‘What else can we do?’: trespassers demand right to roam minister’s 12,000-acre estate

Make Your Photoshoot Stand Out With These Smoke Grenades

(Pumpkin) Spice Up Your Emails with Fall and Halloween-themed Templates

Full support to sanctions on Pelosi