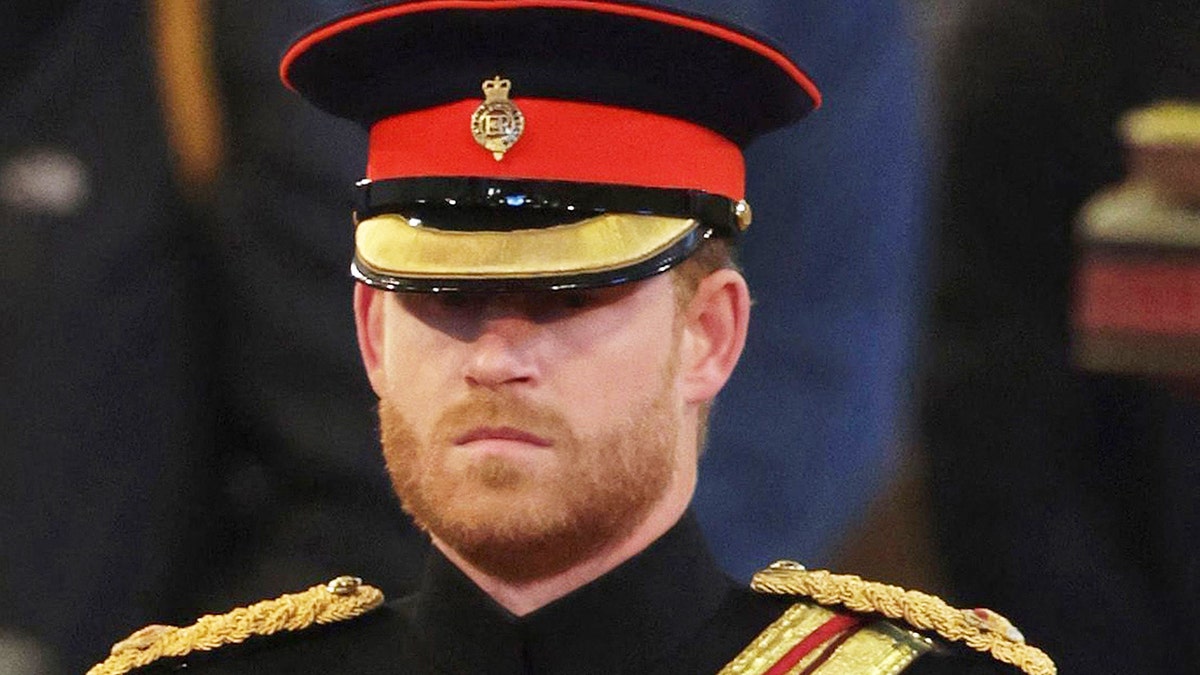 Prince Harry’s military uniform was noticeably different from Prince William’s and Prince Andrew’s during Queen Elizabeth II’s vigil, but one royal filmmaker insists there was “no ulterior motive” from Buckingham Palace.

Before the late monarch’s state funeral on Monday, the princes stood vigil over her coffin at Westminster Hall. The “EIIR” initials were positioned on the shoulder of William’s uniform and were also seen on Andrew’s military regalia during another vigil. The insignia stands for “Elizabeth Regina” or “Queen” in Latin. It also includes the middle symbols indicating she is the second Queen Elizabeth.

“The second reason is that he was granted those ‘EIIR’ letters when he was an aide-de-camp for Her Majesty,” Bullen continued. “The reality is he is no longer in that role. And those letters were no longer required to be on the uniform. The reasons are clear. There is no ulterior motive. Those are just the rules.”

Bullen is an award-winning documentarian who has been producing programs about the British royal family for 20 years and has worked closely with the king for about a decade.

His subscription service is launching two specials for streaming: “The Royal Beat: Her Majesty’s Final Journey” and “Recollections: Memories of Her Majesty.” Both feature royal experts and palace insiders weighing in on Queen Elizabeth’s life and legacy.

Bullen also explained why Andrew, who stepped down as a senior working royal in 2019, was allowed to wear his lettering.

“The symbol/cipher is worn by personal aide-de-camps to the sovereign,” he said. “Harry was stripped of this role when he stepped down as a working royal. However, Andrew remained as a personal aide-de-camp to the queen. Therefore, he was allowed by the king to wear the lettering on his uniform for the vigil.”

Harry was allowed to wear his military uniform at the last minute after receiving approval from his father, King Charles III. It is believed the decision was made following days of backlash from the public. According to palace sources, the decision was also made without Harry requesting a change.

The Duke of Sussex, who served 10 years in the British Army and was deployed to Afghanistan twice, wore a Blues and Royals No. 1 Uniform, KCVO Neck Order and Star, Afghanistan Operational Service Medal, Golden, Diamond and Platinum Jubilee medals and Army pilot wings.

Harry lost his three honorary military titles (captain general of the Royal Marines, honorary air commandant of RAF Honington, and commodore-in-chief, Small Ships and Diving, Royal Naval Command) after he and his wife Meghan Markle stepped back from their senior royal roles in March 2020.

Andrew spent 22 years in the Royal Navy and served as a helicopter pilot during the Falklands War in 1982. The Duke of York was stripped of his military titles and royal patronages in January after he was accused of sexual assault by Virginia Roberts Giuffre. She was a victim of late American financier and convicted sex offender Jeffrey Epstein.

An exception was also made for the 62-year-old to wear his uniform once during the mourning period. Andrew wore his military garb for a Vigil of the Princes, where he joined his siblings in standing a symbolic guard over his mother’s coffin at Westminster Hall. Both Andrew and Harry wore dark suits during the state funeral. Buckingham Palace previously confirmed that only working members of the royal family who hold military rank would wear uniforms during the events leading up to and including the queen’s funeral.

A spokesperson for Harry previously told Fox News Digital that the duke would wear a suit throughout the events honoring his grandmother.

“His decade of military service is not determined by the uniform he wears, and we respectfully ask that focus remain on the life and legacy of Her Majesty Queen Elizabeth II,” the spokesperson added.

“Everybody just wanted to focus on doing the right thing for the queen,” he explained. “William and Harry were very clear in stating that they wanted this to solely be about honoring their grandmother, honoring a remarkable woman. Everybody put on a brave face and tried to do the right thing over the last 10 to 12 days. Has there been a great mending of the brothers’ relationship? From what I’m hearing, the answer is no. They saw each other on Harry’s birthday. They spent time with the family at various dinners and events… But I think there’s still a lot of healing that needs to happen for the relationship to ever be back at the place it was previously.”

Bullen is “hopeful” that the brothers will mend their differences in time.

“I think reconciliation is always possible in every family,” he said. “Plenty of families fall out. Plenty of brothers have been at war. But they also find a way of making peace. So there is still hope. When the king gave his speech, he proclaimed his love for Harry and Meghan. That was the first step in saying, ‘Come on, we’re all still one family.’ But I do think there’s a lot for each side to do. I think each side needs to move a little toward the other. But there is always hope. And I do think that the king would really want the relationship to be repaired. It may take some years, but Harry is still very much a member of that family. I do think everybody would like to find a way.”

Fox News contributor Duncan Larcombe previously shared that it possibly was an “oversight” concerning why Harry’s EIIR symbol was missing from his uniform while Andrew was allowed to wear his.

“It makes no sense,” he added.

Queen Elizabeth passed away on Sept. 8 at Balmoral Castle in Scotland. She was 96. The late queen was laid to rest beside her husband of 73 years, Prince Philip, during a private burial service.