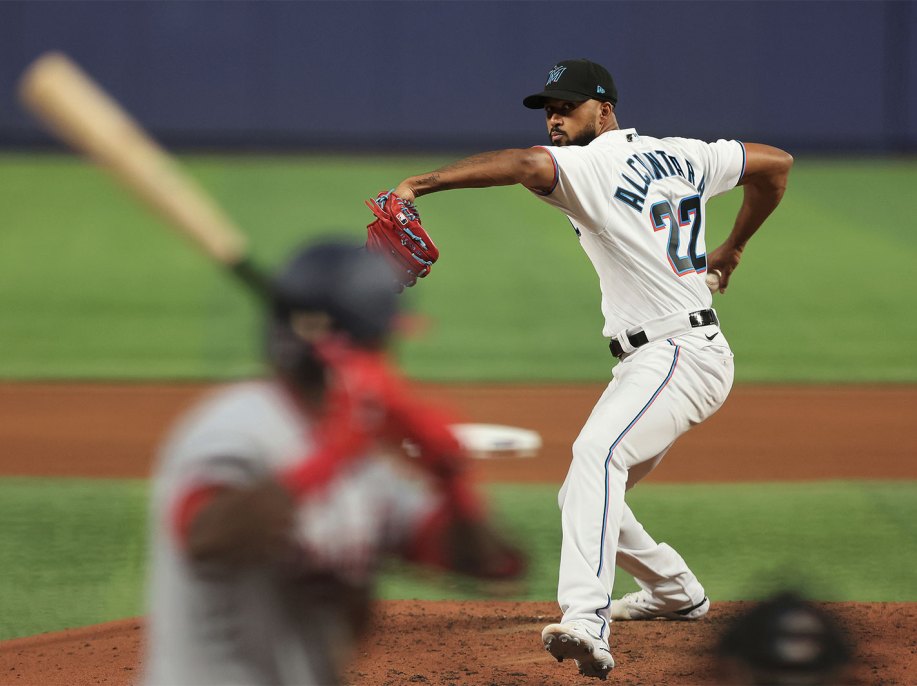 Sandy Alcantara is a pitcher out of a different era of MLB history.

The reshaping of baseball this century has pushed more than a few charming and once-common archetypes to the periphery: the slap-hitting infielder, the tinkering top-step manager and, most lamented of all, the workhorse ace. Time was, you could watch Bob Gibson, Roger Clemens or Clayton Kershaw go their eight-plus innings every five days, ignoring pitch counts and putting the full and total kibosh on opposing offenses all on their own. Now, due to a combination of that caliber of pitcher being extremely rare and contemporary doctrine favoring a run of late-inning relief fireballers, even the best starters usually pack it in after six frames. The approach works. It’s also kind of a bummer.

But! There are 30 MLB teams who each play 162 games a year, and one of those teams is the Miami Marlins, and 30-some-odd of their games are started by Sandy Alcántara. Which is to say that, if the go-it-alone starter is fading, he is not yet extinct.

At 6-foot-5, Alcántara has the build and bearing of the hallowed hosses of yesteryear: an unflinching stare and mammoth stride, an arm arc that brings to mind the hydraulic churn of a big machine somewhere you really shouldn’t have wandered without a hard hat. He also has the goods: a fastball on the fringes of triple digits, boring in or wire-straight, that fastens to the edges of the strike zone; a power changeup that goes only marginally slower (92 mph, often) but bites downward; a keep-’em-honest slider. And he insists on using those goods as much as he can. Sunday afternoon in Queens, Alcántara worked seven scoreless innings against the Mets, bringing his season tally to 130⅓ innings pitched, the most in the Majors by a dozen.

Through games of July 13.

Getting Francisco Lindor to ground into a double-play and Pete Alonso to pop up.

“>49 — seemed not to register. “When you believe in your stuff,” Alcántara said postgame, “you don’t have to worry.”

This has been the project of Alcántara’s young career: to marshal the confidence that his ability deserves. By the end of last season, the 26-year-old had found a level that might have earned him something of a reputation, had he played for a club other than the Marlins, putting up a 3.48 ERA between 2019 and 2021. Still, in big spots, he too often clung to an overcautious logic that applies to less gifted arms, aiming for the corners and falling behind in counts. In 2021, his walks plus hits per innings pitched (WHIP) — 1.07 over the full year — swelled to 1.35 with runners in scoring position, and to an even 3.00 with men on second and third. “Young guys have a tendency to spiral,” Miami pitching coach Mel Stottlemyre Jr. told me. “He needed to learn that he didn’t need to add anything more in tight spots, just continue pitching.”

Over the offseason, Stottlemyre and Alcántara focused on the changeup, less as a pitch in itself than as a proxy for an emboldened mindset. That change was so effective, Stottlemyre thought — hard to pick up and just plain hard, with delirious last-second dip — that Alcántara could use it not just as a counter to his fastball but as the cornerstone of his whole approach. Coach counseled player to lay that sucker smack in the strike zone and let it do its thing. Plenty of hitters would still swing over it, based on its diving action alone; those lucky enough to get their bat on the ball would chunk it into the infield grass. “I just wait,” Alcántara told me a couple days before the Mets start, during which he induced 10 ground-ball outs. “For contact, a swing-and-miss, a strikeout, whatever.”

The upshot of all this is that Alcántara now finds himself walking a developmental path that was supposed to be closed down for good. He’s pitching a lot better while he’s working a lot more, excellence and efficiency hoisting each other up. The ERA, 1.73, is more than a run lower than anything he’s ever achieved before and just .02 off of the MLB lead, even as he paces the majors in innings per start. In the first full-length season the National League lifer has tangled with designated hitters, his advanced stats all sit at career-best levels. Alcántara’s WHIP is down below one baserunner per inning, at 0.91; ERA+, which doesn’t even weigh the accumulated value of his innings-eating, grades him out as the best pitcher in baseball on a batter-by-batter basis. Baseball-Reference.com’s Wins Above Replacement has him as the top player in the entire sport.

Through games of July 13.

The quibbler pointing to Alcántara’s strikeout rate, which sits around league average, misses both the point and the anachronistic fun of what he’s doing. For all its GIF-able glory, the strikeout has strategic value because it mitigates the risk that usually comes whenever big-league hitters make contact. But when the pitch they’re hitting is Alcántara’s wind-tunnel sinker or wormhole change? There really aren’t many risks to mitigate, just outs to pile up as quickly as possible.

On the mound, Alcántara wears a persona of extreme unflappability. Asked about his tendency not to argue calls or fret over dribblers that sneak past the infield, he pulled up his sleeve to show off the credo tattooed on his bicep: “Work hard and quietly and let your success make the noise.” His consistency can make it hard to single out an exemplary performance, but a week and a half ago against the Angels he put forward a candidate: eight shutout innings, two hits, 10 Ks, no walks, no hope. In the fourth, he more or less shoved Mike Trout around over a nine-pitch at-bat, plying the three-time MVP with unsubtle heaters until he swung through one. Shohei Ohtani came to the plate right after; Alcántra dropped a changeup at his shinbones, and Ohtani rolled it to second. Two of the most talented hitters of their generation spent the night going a combined 1-for-6 with an infield single, looking for all the world like they still had the on-deck donuts slowing down their bats.

One thing Alcántara isn’t: a template. Frustratingly and totally bad-ass-ly, his revival of pitching’s proudest archetype mostly emphasizes why today’s game has so little use for it. Why can’t more aces go deep? Look at what Alcántara has to do to get there, firing late-inning two-seamers as swervy as ever and tacking a third digit to his high heater, and the question answers itself.

Alcántara’s M.O. also takes a team willing to allow it. He is almost single-handedly keeping Miami at the fringes of the playoff race, four games back of the third Wild Card spot with 7 percent postseason odds, according to the FiveThirtyEight model.

Again, through games of July 13.

“>50 (The Marlins are 12-6 in games he starts, 30-39 in games he doesn’t.) Still, the team’s brass keeps close watch. “If we let him go, there’s a threshold, and all of a sudden we won’t be watching him pitch every five days,” Stottlemyre said.

In the meantime, the Sandy show goes on, as reliable a performance as the sport currently offers. He’s got a 1970 game plan and a 2070 arm. Alcántara won’t turn back the clock on convention, but it’s good fun that someone, somewhere is trying.

Check out our latest MLB predictions.

Where things stand in the racial discrimination lawsuit filed by Brian Flores against the NFL With commissioner Roger Goodell looming as a potential arbiter, concerns about partiality and fairness remain in the case against the league

Reactions from Qatar as World Cup could begin day early

New NASCAR Production HQ Next To Research And Development Center

The Pirates Beat The Brewers On A Walk-Off Wild Pitch