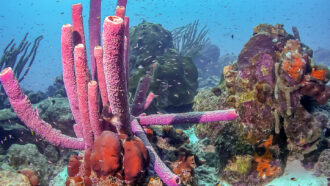 The next time you spot a sea sponge, say “gesundheit!” Some sponges regularly “sneeze” to clear debris from their porous bodies.

As filter feeders, sponges draw in water through inlet pores — called ostia — and strain it through an internal canal system for nutrients. But there are also inedible bits in the water, like sediment. To prevent the undesirable junk from clogging up their outer pores, a Caribbean tube sponge (Aplysina archeri) uses mucus to trap and sneeze out unwanted particles, Niklas Kornder, a marine biologist at the University of Amsterdam, and colleagues report online August 10 in Current Biology. To the team’s surprise, it found that the sponge expels its snot from the same pores through which it absorbs water.

It’s “like someone with a runny nose,” says team member Sally Leys, an evolutionary biologist at the University of Alberta in Edmonton, Canada. “It’s constantly streaming, but it’s going counterflow to the in-current.”

Researchers knew that sponges used contractions dubbed “sneezing” to move water through their bodies in a one-way flow. Typically, water comes in through numerous ostia and leaves through the osculum, a hole near the sponges’ top.

But when the team captured time-lapse video of A. archeri, it saw tiny specks of mucus exiting from the ostia, moving against the flow of incoming water. Sneezelike contractions appeared to expel and move the specks along a “mucus highway” across the surface of the sponge to points where they collected in stringy, gooey clumps. Unlike an explosive human sneeze, the sponges slowly and continuously secreted debris-laden mucus from their ostia, with one contraction taking between 20 and 50 minutes, the study finds.

The Caribbean tube sponge (Aplysina archeri) uses contractions — called “sneezes” — to help eject mucus from its pores, or ostia. As the time-lapse video zooms in closer, it’s possible to see tiny specks of debris floating out of these pores and traveling along a “mucus highway” where they collect into stringy clumps of goo floating above the surface of the sponge. In real time, this sponge takes between 20 and 50 minutes to complete a sneeze.

Other sea critters feast on these ocean boogers, like brittle stars and small crustaceans. Scientists view sponges primarily as habitat builders, but the mucus buffet shows they also perform an important function as food providers, says Amanda Kahn, a marine biologist at Moss Landing Marine Labs in California who was not involved with this work.

“There’s so much to be said for a study that really spends time and watches,” Kahn says. “They let the animals show for themselves what was happening.”

Most sponges appear to sneeze, so it’s likely not just A. archeri that uses the counterflow technique, Leys says. The team also noted a similar behavior in an Indo-Pacific sponge (Chelonaplysilla sp). But biologists need to dig deeper to figure out how widespread the mechanism is. It’s also unclear exactly what the mucus is or how it’s moving backward through pores.

Share
Previous How to create a custom timeline in Google Docs using the ‘Drawing’ tool, for work presentations and more
Next How The NBA Is Using Summer League — And Virtual Reality — To Train Refs