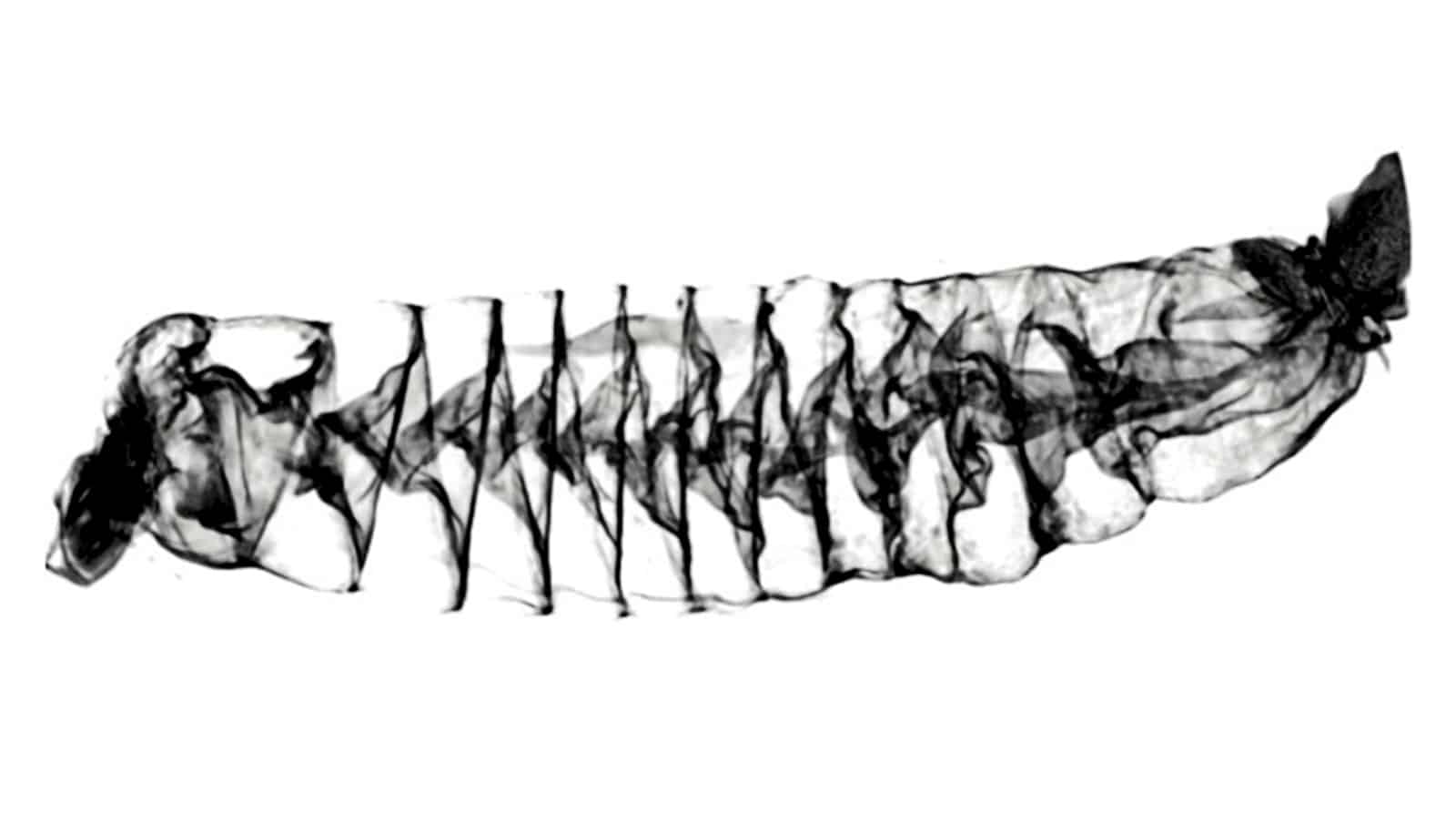 The scans will advance the understanding of how sharks eat and digest their food.

“The vast majority of shark species, and the majority of their physiology, are completely unknown.”

Contrary to what popular media portrays, we actually don’t know much about what sharks eat. Even less is known about how they digest their food, and the role they play in the larger ocean ecosystem.

For more than a century, researchers have relied on flat sketches of sharks’ digestive systems to discern how they function—and how what they eat and excrete affects other species in the ocean.

“It’s high time that some modern technology was used to look at these really amazing spiral intestines of sharks,” says lead author Samantha Leigh, assistant professor at California State University, Dominguez Hills. “We developed a new method to digitally scan these tissues and now can look at the soft tissues in such great detail without having to slice into them.”

The researchers primarily used a computerized tomography (CT) scanner at the University of Washington’s Friday Harbor Laboratories to create 3D images of shark intestines, which came from specimens preserved at the Natural History Museum of Los Angeles.

The machine works like a standard CT scanner used in hospitals: A series of X-ray images is taken from different angles, then combined using computer processing to create three-dimensional images. This allows researchers to see the complexities of a shark intestine without having to dissect or disturb it.

“CT scanning is one of the only ways to understand the shape of shark intestines in three dimensions,” says coauthor Adam Summers, a professor based at Friday Harbor Labs who has led a worldwide effort to scan the skeletons of fishes and other vertebrate animals.

“Intestines are so complex—with so many overlapping layers, that dissection destroys the context and connectivity of the tissue. It would be like trying to understand what was reported in a newspaper by taking scissors to a rolled-up copy. The story just won’t hang together.”

From their scans, the researchers discovered several new aspects about how shark intestines function. It appears these spiral-shaped organs slow the movement of food and direct it downward through the gut, relying on gravity in addition to peristalsis, the rhythmic contraction of the gut’s smooth muscle.

Its function resembles the one-way valve designed by Nikola Tesla more than a century ago that allows fluid to flow in one direction, without backflow or assistance from any moving parts.

This finding could shed new light on how sharks eat and process their food. Most sharks usually go days or even weeks between eating large meals, so they rely on being able to hold food in their system and absorb as many nutrients as possible, Leigh says. The slowed movement of food through their gut that the spiral intestine causes probably allows sharks to retain their food longer, and use less energy processing that food.

Because sharks are top predators in the ocean and also eat a lot of different things—invertebrates, fish, mammals and even seagrass—they naturally control the biodiversity of many species, the researchers say. Knowing how sharks process what they eat, and how they excrete waste, is important for understanding the larger ecosystem.

“The vast majority of shark species, and the majority of their physiology, are completely unknown. Every single natural history observation, internal visualization, and anatomical investigation shows us things we could not have guessed at,” Summers says.

The authors plan to use a 3D printer to create models of several different shark intestines to test how materials move through the structures in real time. They also hope to collaborate with engineers to use shark intestines as inspiration for industrial applications such as wastewater treatment or filtering microplastics out of the water column.