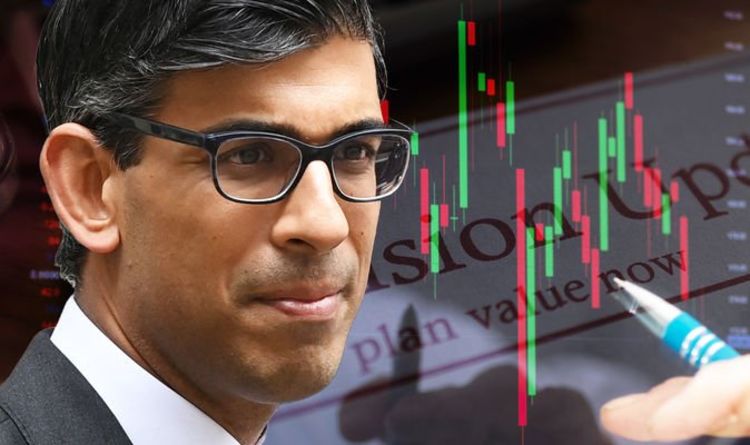 Chancellor Rishi Sunak is under mounting pressure as the state pension is lined up for a number of potential changes. The triple lock – which guarantees the state pension rises in line with the highest of inflation, increasing average wages, or 2.5 percent – could be abandoned or changed. This is because average earnings could rise anywhere between eight and 10 percent, an increase bigger than usual due to the country’s recovery from the Covid pandemic.

However, another debate surrounding the state pension was sparked last month when a petition urged the Government to lower the pension age.

People can currently access their pension pot at 66, but the petition argued that dropping the pension age could help the UK’s economy recover.

It said: “Young people are struggling to find work and losing their jobs, due to the pandemic.

“Why not allow older people to retire earlier, thereby freeing up jobs for young people?

“There would be a cost, however surely a far more positive cost than paying Universal Credit?

“Not to mention the option of restoring the balance back into young people’s favour and helping restore their future.”

However, pension expert at Aegon, Steven Cameron, has warned that reducing the age at which the state pension can be accessed would only mean a reduction in monthly payments.

“There is a case for Government to explore allowing people to choose to take their state pension from an earlier age, perhaps 63, but at a reduced amount to reflect the fact it is starting earlier and will be paid for longer.

“Offering early access at a reduced level could be a big help to many thousands. It’s already possible to defer taking state pension in return for an increased weekly amount.

“In the private pension space, pension freedoms have proved hugely popular in allowing people to take more control over when they start drawing their defined contribution pension and how much they take as their retirement progresses.

“This wouldn’t be without challenges and there would need to be a way of making sure people don’t end up with an income from state and private pensions below the means tested benefit level.

“Some checks and balances might be required but with some creative thinking, this issue shouldn’t be insurmountable and would be well worth the prize if it helps people with their transition into retirement.”

Mr Cameron told Express.co.uk recently that it is unlikely the pension age will be lowered.

He said: “I think that it would be highly unlikely the government would reduce the pension age. Despite the pandemic, life expectancy will not have suffered due to the pandemic.

“Going forward, life expectancy should continue to go up and therefore it is reasonable the state pension age goes up. It has just gone up to 66 and it is due to go up to 67 in 2028 and then to 68 in 2034.

“And I suppose the only thing that might happen is the government may defer those future increases, but I certainly don’t think they will bring the age back down again.

“The younger the state pension is, the longer people need a state pension for and the more costly it is for people of working age.”