the 2022 congressional baseball game is a toss up

The 2022 Congressional Baseball Game Is A Toss-Up

The 2022 Congressional Baseball Game Is A Toss-Up 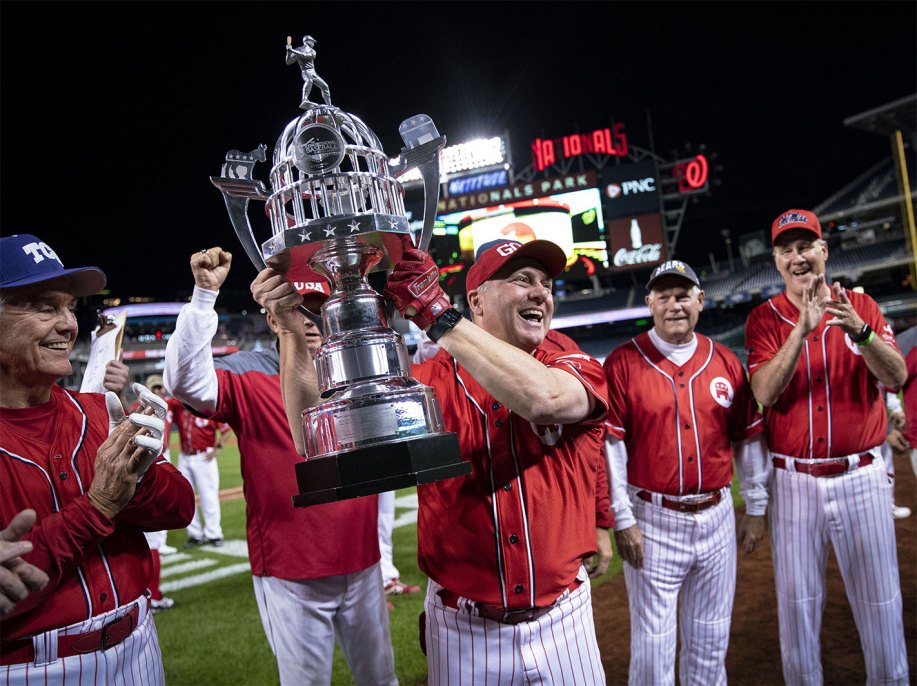 Without Cedric Richmond to deal with, the Republicans won in 2021. But who has the edge this year?

Think your office softball league is serious? Try the Congressional Baseball Game. Most summers since 1909, Democratic and Republican members of Congress have taken a break from legislating to play a friendly game of the national pastime, and through many ups and downs, it has slowly evolved into a huge event. Last year’s game, played under the lights at Nationals Park, attracted a reported 14,348 spectators and raised $1.2 million for charity.

Since 2009, the Democratic team has dominated with a 10-2 record, thanks largely to its Shohei Ohtani-esque two-way threat, former Rep. Cedric Richmond. According to statistics that I keep of the game, the former Morehouse College baseball player hit .654/.757/1.077 in his Congressional Baseball Game career — and went 8-0 with a 2.64 ERA on the mound. Richmond was truly in a league of his own; his 2.8 wins above replacement

“>33 over that span were seven times as many as any other player.

But Richmond is no longer on the Democratic roster, having resigned from Congress to work in President Biden’s White House — and the Congressional Baseball Game is suddenly a toss-up again. Last year’s contest, the first without Richmond since 2010, was a nail-biter for all seven innings and ended in a 13-12 Republican victory — the GOP’s first win since 2016.

And this year’s game — which takes place on Thursday at Nationals Park — should be competitive, too. Several up-and-coming lawmakers have emerged to replace Richmond as the game’s star players, and they are a bipartisan crop. Of the 10 most valuable players on the 2022 rosters (according to total WAR since 2009), five are Democrats and five are Republicans.

Statistics for the 10 most valuable active players in the annual Congressional Baseball Game, since 2009

*FanGraphs version. Does not include defense or baserunning other than stolen bases.

Even with Richmond’s departure, the Democrats are left with several solid players. Veteran Rep. Adam Smith, who has played in the game on and off since 1997, and Rep. Eric Swalwell, a speedster with 10 career stolen bases, should both return to the lineup this year. But the anchor of that lineup — and the new holder of the title “best congressional baseball player” — is Democratic Rep. Jimmy Panetta. He’s produced 0.4 WAR in his four-game career thanks to a rare combination of power (two triples and one inside-the-park home run) and speed (five stolen bases).

Sophomore Rep. Tom Malinowski has also been a valuable table-setter for Democrats: He’s gotten on base in five of his seven career plate appearances, and he’s legged out six stolen bases. Meanwhile, freshman Sen. Jon Ossoff is something of a poor man’s Richmond: In his Congressional Baseball Game debut last year, he went 1-for-2 at the plate and gave up just one run in two innings of relief on the mound. (In a league where the average ERA is 6.47, this qualifies as ace material.) Most impressively, he struck out three Republicans and walked none, making an excellent case to start this year’s game for Team Blue.

On the Republican side, for years there was really only one standout player: Ironman Rep. Kevin Brady, who has played in 24 consecutive congressional baseball games and hit a workmanlike .379/.550/.448 since 2009. (Sadly, with his decision not to run for reelection, the 2022 game will be his last.) But recently, he’s been joined by some exciting newcomers.

That list starts with Rep. Greg Steube, the GOP’s answer to Richmond. He’s been the Republican starting pitcher in the last two games, and while he hasn’t exactly been dominant (with a 9.19 ERA and a 1.25 strikeout-to-walk ratio), he has been a valuable innings-eater, throwing more than 100 pitches in each outing. And at the plate, he has been aces: He’s got four hits in seven at-bats, including what was likely the first over-the-fence home run in the Congressional Baseball Game since 1997.

Amazingly, Rep. Anthony Gonzalez is an even better hitter: The former NFL player is 6-for-8 in his two games, with two doubles and an inside-the-park home run. His .891 wOBA leads all active players with more than one plate appearance. Unfortunately for the GOP, though, this is also his last game: As one of the 10 Republicans who voted to impeach then-President Donald Trump, he is retiring from Congress at year’s end.

We won’t have to wait long to see which quintet leads its team to victory this year; if you’re not attending the game in person, you can watch it live on C-SPAN and Fox Sports 2 on Thursday night at 7 p.m. Eastern.

Rod Graves continues work in improving inclusive hiring in the NFL Fritz Pollard Alliance executive director: ‘The most challenging part of the job is recognizing that change is not occurring fast enough for many in the field’

Dan Pompei, Hall of Fame sportswriter | Tell Me A Story I Don’t Know