This U-shaped Midea air conditioner is the quietest model we’ve ever tested, and it’s designed in a way that still lets you open your window. But the installation process isn’t fun.

The Midea U MAW08V1QWT is simply the quietest air conditioner we’ve ever tested, but that isn’t the only reason it stands out from the crowd. It also has an inverter compressor, which means it uses about half as much energy as a non-inverter AC. And unlike traditional air conditioners, which typically lock your whole window in a closed position as long as they’re installed, the Midea U has a unique U-shaped design that allows you to continue opening and closing your window as normal—for example, if you want better circulation on a cooler day when the AC isn’t running. As part of this design, Midea also moves most of the louder hardware to the back of this unit so that it sits outside the window, using the glass as a buffer layer to further mute the sound. In addition, it comes with its own bracket—about a $100 value—which locks firmly into the sliding tracks of your hung window. The Midea U is Energy Star certified and Wi-Fi enabled, too, with easy and convenient smart-home integration. But there is one catch: the installation process. Though the process is easier than it looks, it’s still more involved than installing your typical AC, and you won’t get much helpful advice by reading any of the four instruction manuals that come with the Midea U.

If you’re looking for a more traditional window AC, the GE PHC08LY is the quietest one available, and it’s also better-looking than most. In its dedicated Quiet Mode, it’s comparable to the Midea U in volume; even with the compressor running and the fan on high, it’s still quieter than the average conversation or any other AC that we’ve tested. The touch-sensitive controls and soft LED lights give it a classy, futuristic feel, and GE’s recently updated smart-home integration allows for seamless, natural voice commands. It’s also one of the few models we’ve seen with Apple HomeKit integration, as well as location services, which you can use to automatically turn the AC off when you’re not home (or on when you are). This model is not quite as energy efficient as the Midea U (though it is Energy Star certified), nor does it come with its own safety bracket, but it’s also much, much easier to set up than our top pick, and it’s just as pleasant to live with.

This Frigidaire unit is easy to install and cools a room about as well as our top pick for a slightly lower price. However, the sound is a little more grating, especially at lower fan speeds.

We like to think of the Frigidaire FHWW083WBE as the Old Faithful of window air conditioners. We’ve been recommending it (or its nearly identical predecessors) since 2014, and it has consistently proven to be a reliable and affordable option. It’s a little louder than our other picks (though still quieter than most ACs), with a less-pleasant mechanical growl that’s more pronounced when you run it at lower settings. But it still cools the room quickly and efficiently, and it typically costs less than our other picks while offering comparable performance and smart-home capabilities. If you want to save even more money, the Frigidaire FFRE083WAE is essentially the same unit minus the smart-home capabilities.

The Windmill Air is the easiest air conditioner we’ve ever installed, and it boasts plenty of other nice and thoughtful details that make it pleasant to live with overall.

The Windmill Air might not be as quiet or efficient as our top pick, but it’s much, much simpler to install, and it offers plenty of other thoughtful features that make it easy to live with. It’s one of the nicer-looking ACs we’ve ever tested, too, with rounded corners and subtle indicator lights that won’t keep you up at night. The unit even has a plastic cover over the back, so you don’t cut your hands on those razor-sharp exhaust fins, and the app includes a shortcut for finding installation help from TaskRabbit. Overall, it’s a great AC if you just want something that blends into the background and does the job without a fuss. 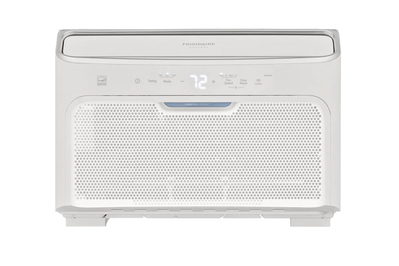 The inverter-style Frigidaire Gallery GHWQ083WC1 is one of the most energy-efficient ACs we’ve ever tested, with lights and sounds that basically blend into the background.

The inverter-style Frigidaire Gallery GHWQ083WC1 is as efficient as our top pick, using nearly 40% less energy than the federal standard for air conditioners and offering all the same smart-home features. It’s slightly louder than the Midea, but it’s still essentially unnoticeable in the room unless the fan is on high. That same fan also helps the Frigidaire maintain an even more impressive cooling consistency across the room than we’ve gotten from other ACs we’ve tested. The LED display on the control panel shuts off automatically after a few seconds so as not to illuminate the room (although this can be occasionally annoying, too, such as when you want to check the settings). The smart-home app can be a little glitchy at times, as well. But in spite of the flaws, this Frigidaire model ranks right up there among the best ACs available. 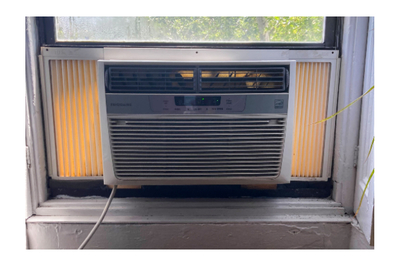 In the interest of value, practicality, and waste reduction, your buddy’s old AC may be your best bet, as long as it meets some basic modern standards.

After testing dozens of air conditioners over the years, we’ve found that a lot of the models we end up dismissing tend to be louder, less efficient, and harder to live with than our picks. But on a hot day, they can get the job done—and sometimes, that’s all you really need. Rather than recommending a specific low-priced new model that we couldn’t in good conscience call a strong value, we’re offering some detailed but flexible advice on how we’d shop for whatever used air conditioner is available whenever you can find it. As long as the unit was made within the past decade, it should be about as efficient as a new one. (If going secondhand doesn’t work out for you, check out the Wirecutter Deals page and some of the competitors we’ve tested.)

Here’s How to Become a Home Stager, According to an Expert

A Historic Visit By The Pope

News of the Day From Around the World, April 6

Indian origin man dies after being found injured in SUV