The best tennis balls for any player 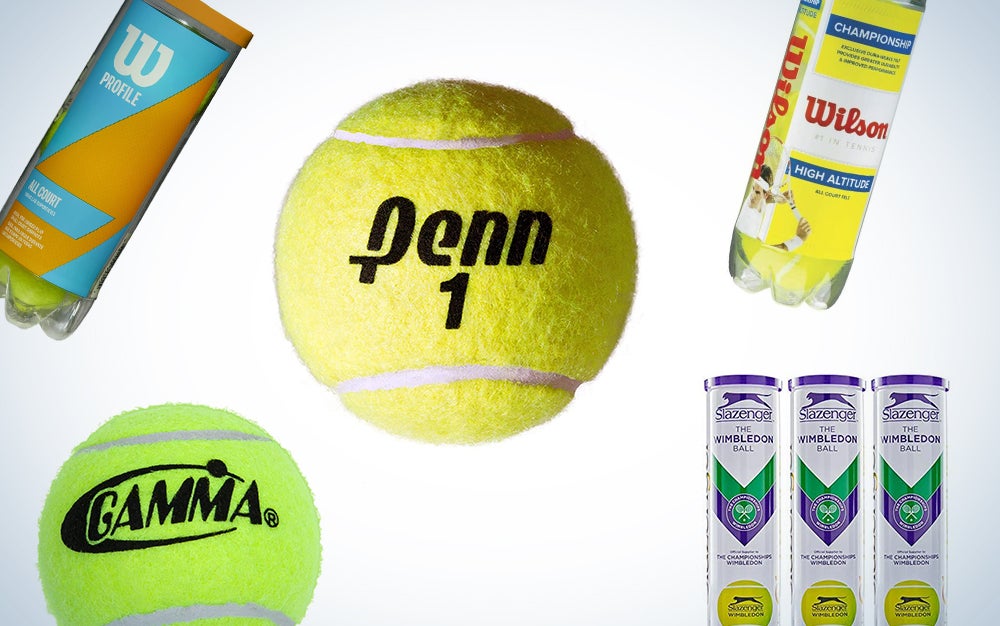 Whether you’re a serious player or just starting out, your choice of tennis ball can profoundly affect your game. Modern balls have evolved a ton since the 1870s when players switched to rubber balls instead of leather or cloth balls stuffed with horsehair or rags.

For speed, the bouncy orbs were made from vulcanized rubber, an innovative material of the time invented by self-taught chemist Charles Goodyear in the 1850s. Soon after, the all-rubber tennis ball was covered with flannel to improve play, followed by a few more adjustments in the design, including moving from a clover leaf construction to two half shells. Now what you have are ingenious spheres for volleying at your best and mastering the art of spin.

How we selected the best tennis balls

Different tennis balls serve different purposes, one of which may be sharpening up your serve. For this roundup, we’ve focused on pressurized tennis balls, which provide superior performance for matches and serious play, as well as one budget-minded pick for pressureless tennis balls since they’re a good choice for beginners, practice, or tennis ball machines.

But, keep in mind, there is a big difference between popping open a fresh can of three balls and a net bag of practice balls, both in performance and price. When choosing the best tennis balls, we considered value, versatility, and function, as well as the enduring quality of certain brands. While most tennis balls stick primarily to the classic yellow, you’ll find a few options in fun colors for practicing or tossing around the dog park. We considered a wealth of information and reviews from around the web to hone in on the best tennis balls for any player.

Things to consider when looking for the best tennis balls

There are two main differentiators between tennis balls, pressurized and pressureless. Pressurized balls are hollow and filled with gas, and they also come in a pressurized canister to maintain optimal psi. In contrast, pressureless balls have a solid core and don’t require special packaging.

Since altitude can affect pressure, high-altitude tennis balls are pressurized for use in areas above 3,500 feet.

We mostly looked at the best general use tennis balls. However, if you prefer playing on a specific surface, such as grass, clay, or hard courts, this is another factor to consider. The best tennis balls for clay courts are different from those you would want to play on grass or hard courts. Playing a regular ball on a hard court will wear it out quickly. Tougher extra-duty balls have a more durable outer coating to prevent them from deteriorating too quickly.

Why it made the cut: A classic ball has a well-earned reputation for consistency, durability, and overall feel.

As sports equipment companies go, Wilson is a multi-sport athlete and a utility player. In tennis, they have stood out for their hard-court tennis ball performance. So much so, that when the U.S. Open switched to hard courts in 1978, they became a top pick among the pros. In fact, they’re the official ball of the U.S. Open and Australian Open Grand Slam Championships, as well as the NCAA Tennis.

Adding to that, these Wilson tennis balls, which are USTA and ITF approved, shows their versatility. It is designed for all-court performance and has added durability thanks to their signature Duraweave felt. You can use these balls for a heated match or a sweaty practice.

These pressurized balls come in a pressurized canister to keep them fresh and provide that satisfying pop. Wilson actually invented this type of packaging. Once the balls are out of the package, however, eventually pressurized tennis balls lose their oomph and their bounce. Then it’s time to toss it to the dog or use them as dryer balls.

A super-value option for practice or newbies Gamma

Why it made the cut: Durable construction and a low price make these excellent for practice or low-stakes matches.

You can’t beat the price on these bulk balls—our pick for the best tennis balls for practice. These pressureless tennis balls come in their own handy mesh bag ready to be tossed in the trunk of a car or your garage. While these are definitely a solid, pressureless pick, they are designed for playing when the pressure is off. They’re ideal for beginner’s lessons, a junior league, general practice, or a tennis ball machine. You won’t find these on any championship courts, or even a fast-paced match at the country club for that matter.

The nice thing about pressureless balls is they last much longer compared to the shorter lifespan of pressurized balls. The pressureless spheres even get bouncier over time. They won’t ever wow you the way a fresh can of pressurized balls does, but they also won’t let you down and go flat. They also channel the “just for fun” vibes into cheery colors like blue, orange, and pink, along with the standard yellow.

They’re available in packages of 12 or 18, but you can also get a 48-ball bucket if you’re looking to fill a practice machine or a basket.

If you’re wondering, why yellow? In 1972, the International Tennis Federation (ITF) chose yellow balls based on research suggesting it was the most visible to TV viewers. (Wimbledon stood its ground on traditional white-colored balls until 1986 when it also switched to yellow.)

Top of the Line

Why it made the cut: These high-end balls are worthy of tournament championship play, which makes them more than ready for the local club.

This is the tallboy of pressurized ball cans and comes with four balls per pop instead of the typical three. While this brand has the prestige of having been used at Wimbledon since 1902, they haven’t rested on their laurels. (It may even be the longest-lasting sports brand partnership in history.)

From interior to exterior, these Slazenger tennis balls have improved on their winning design over the decades, including the Tour Core, or a center engineered for maximizing kinetic energy. The outside features a finely woven wool cloth—let’s just call it the cashmere of felt coverings—for increased durability and responsiveness. The tightly woven cloth also features patented Hydroguard technology to repel up to 70% more water than a standard ball for great performance under wet conditions.

To make sure it’s super eye-catching for players and spectators, the ball gets its perfect yellow hue from an exclusive Ultra Vis dye with a special patented application process. Just playing with these balls will make you feel like a champ.

The most popular ball in the world should look familiar. Penn

Why it made the cut: These pressurized balls offer great bounce, but have enough durability to endure fast-paced play on hard surfaces.

Penn holds bragging rights to being “America’s #1 Selling Tennis Ball” (or at least their canister boldly reinforces this claim). They have what it takes to win a popularity contest and be USTA and ITF approved. They’re also the Official Ball of USTA Leagues.

What sets these Penn tennis balls apart is consistency: They have controlled fiber release for consistent nap and natural rubber for consistent feel and reduced shock. The interlocked wool fiber also offers longer wear. While they perform best on hard courts, they’re designed for all-court play, including clay.

Even if you aren’t aiming to enter the Grand Slam arena, these pressurized balls allow you to try and figure out the tricks for putting spin on every shot.

Why it made the cut: Regular pressurized balls bounce out of control at high altitudes, but these won’t.

If your ears have ever popped during takeoff or landing, it’s caused by the air pressure in your middle ear and the cabin pressure being out of whack. So, what does this have to do with tennis balls? When you open a can of pressurized Wilson tennis balls, there’s a pop for the same reason. The can is pressurized to maintain the balls’ psi and elongate their shelf life.

Now, when you go up to a higher altitude, the air pressure drops, which means if you’re hitting the courts in Denver, you’re going to need tennis balls pressurized for being above 3,500 feet—otherwise it could be hard to control the ball since they’ll be bouncing higher and moving faster. When you’re used to playing at high altitudes some players say you need less power but need more control.

The all-court balls off the same quality as their lower-altitude counterparts, including premium woven felt, they just bounce better when you live at the top of a mountain.

Q: What is the longest lasting tennis ball?

If you’re looking for maximum durability, opt for a practice ball that’s unpressurized. They’re typically made of harder rubber and have tough outer layers to make them last almost indefinitely. If you’re looking for more competitive play, look for a ball with extra-duty felt. The tougher weave will stand up better to hard courts over a longer period of time.

Q: What is a high-altitude tennis ball?

These balls are still pressurized, but the manufacturer has adjusted the pressure inside according to the atmosphere. Use a regular pressurized ball at a high altitude and the gas inside will expand too much, making the ball unusually bouncy and hard to control. Using a high-altitude ball in lower regions will feel flat and dead.

Q: Does the quality of tennis balls matter?

Higher-quality balls offer better feel and more control, which matters more to advanced players than to beginners. Most players are likely best-suited by something in the middle rather than always playing on unpressurized practice balls or learning on pricy tournament versions.

A Final Word about Tennis Balls

Tennis balls may all look vaguely the same (apart from rainbow-colored pressureless balls for practicing and the odd one supporting a cause), they’re pretty much all yellow, made of rubber and covered in fuzzy felt. Wading through the sea of tennis balls to find the perfect one depends on your skill level, budget, and where you live. And, if you live above 3,500 feet tennis balls really will bounce differently. Eventually though, all pressurized tennis balls—amateur or pro—go flat, so be prepared to restock. Alternatively, pressureless balls will last until you lose them, but they lack the competitive edge and pizzazz of a pressurized tennis ball. Even people shopping for tennis balls to play fetch with their dog or use in the dryer have favorites, according to user reviews. As a simple rule though, when the pressure is on, always pop a fresh canister. When you’re just a casual player bouncing balls in a park, pressureless ones will do.

Read Next: Naomi Osaka put her mental health first—and that needs to be normalized

The post The best tennis balls for any player appeared first on Popular Science.