The Rumors Are True! HBO Max’s Gossip Girl Reboot Has Been Renewed For 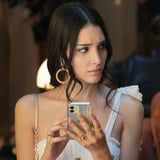 The Gossip Girl reboot has been the talk of the town since its premiere on HBO Max in July, but did you really expect anything less? Fans have gone wild dissecting all the little references to the original series, getting to know more about the up-and-coming cast, and becoming enthralled with the show’s interesting new twists. Just like gossip on the Upper East Side, it didn’t take long for the rumor mill to start spinning about season two.

Well, it seems like the rumors were true! On Sept. 9, HBO Max confirmed the series will be back for another season. While the 12-episode first season has been broken up into two parts, with its second part set to debut in November, it’s unclear just how many episodes season two will have. Though a release date for season two hasn’t been announced yet, we’re already curious to see where the show will go from here.

Gossip Girl: Can Someone Please Explain What Roger’s Cryptic Voicemail to Aki Means?

During an interview with Elle before season one’s debut, showrunner Joshua Safran revealed that he’d love to see the reboot have as many seasons as the original. “I don’t do anything without knowing if there’s more to it, because I didn’t want to wrap it up,” he told the publication. “It’s Gossip Girl, and the hope is, you get more Gossip Girl. What’s the reason for us doing it again, if there’s not going to be more, right? I have three seasons [planned so far], I could tell you right now. We didn’t know it was going to happen for six seasons the first time. But right now, I definitely have three in my head.”

When POPSUGAR talked with the cast ahead of the season one premiere, Zión Moreno told us how excited she was about this new chapter of the franchise and teased the possibility of another season. “I think the fans of the original will be really excited to see this new take on this very famous and classic world,” she said. “I know that there’s going to be a lot of people that might be extra critical of that, and that gives us more motivation to be better and to create something that hopefully stands the test of time. If it goes past season one, which I hope it does, I hope that you get to see a lot of traveling to beautiful places like the original did. I hope we get to showcase more of this world.”