the stock market is in a bottoming process that will

The stock market is in a bottoming process that will lead to 17% upside by early 2023 as the Fed gears up for a data-dependent pause, Stifel says The ongoing sell-off in US stocks is nothing more than the market going through a bottoming process that will ultimately lead to more gains soon.

That’s according to a Wednesday note from Stifel analyst Barry Bannister, who argues that there are several catalysts that can propel the S&P 500 up 17% from current levels to 4,400 by the first quarter of 2023.

“It is only if the Fed becomes incrementally more hawkish [in] November and December that we see 10 year TIPS yield rising further, thus we believe the price-to-earnings ratio is bottoming,” he said, adding that he expects to see lower inflation readings going forward.

“Both PCE and CPI inflation are slowing/topped, and inflation indicators point down, so the question is whether the process occurs fast enough for the Fed,” Bannister said.

Indeed, while the 8.3% August CPI inflation report came in hotter-than-expected and led to a massive sell-off in the stock market, it did represent a deceleration from July’s 8.5% increase and June’s 9.1% pace.

Lower inflation readings should give the Federal Reserve confidence in shifting to a pause in interest rate hikes as it becomes more data-dependent at each FOMC meeting, according to Bannister, and that shift could drive big upside in stock prices.

But what is perhaps most important for the direction of the S&P 500 is whether or not the economy enters a recession, and he doesn’t see that happening until the third-quarter of 2023. That means there’s a considerable months-long trading window from now until at least the end of the first quarter for stock market gains.

And that trading window perfectly lines up with favorable seasonal stock market data.

“Almost all S&P 500 returns occur [from] November 1 to the next year’s April 30. Don’t fight seasonality?” Bannister said. “Fed policy plus S&P 500 negative seasonality (May to October) are headwinds that should subside November 2022 to April 2023.”

And by November, there could be considerable clarity to several worries investors are concerned about, including the Russia-Ukraine war, better winter forecasts which would bode well for Europe’s energy crisis, and a resolution to the US midterm elections, among other things, according to the note.

To position for a potential market rally into early next year, Bannister recommends investors own big tech stocks and cyclical value stocks found in the retail, homebuilding, and bank sectors. 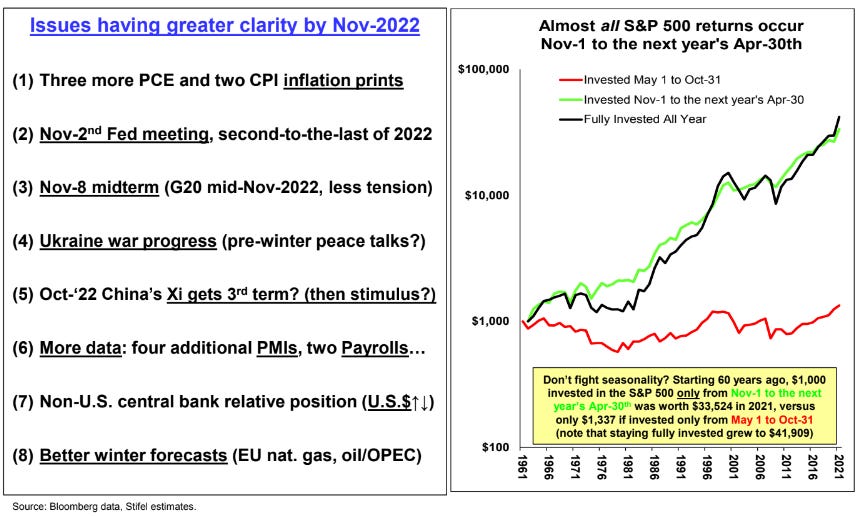 When you buy through our links, Insider may earn an affiliate commission. Learn more. Brad …