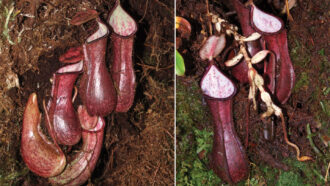 Martin Dančák didn’t set out to find a plant species new to science. The biologist was just on a hike through a rainforest in Borneo, a large island in southeast Asia. Then he and his colleagues stumbled on a sunken surprise.

Hidden beneath the soil and inside dark, mossy pockets below tree roots lurked carnivorous pitcher plants. Most pitcher plants extend their traps up from the ground or dangle them in the air or water. The plants Dančák found bury most of their traps in the soil. It’s the first pitcher-plant species scientists have observed to do this.

The pitchers look a bit like hollow eggplants. They lure unsuspecting prey into a trap sort of like a sewer hole. At the bottom sits a stew of digestive juices. Once an ant or beetle steps in, the insect falls to its death. It drowns in the underground deathtrap and becomes a meal for the plant.

“We were, of course, astonished,” says Dančák. He works in the Czech Republic at Palacký University in Olomouc. “Nobody,” he adds, “would expect that a pitcher plant with underground traps could exist.”

That’s because pitchers tend to be fragile. But the buried traps in the new species have fleshy walls. Those might push against the soil as they grow underground. That’s what Dančák and colleagues hypothesize June 23 in PhytoKeys. Based on its hidden pitchers, they named the species: Nepenthes pudica. It draws on “pudicus,” the Latin word for bashful.

The new work “highlights how much biodiversity still exists that we haven’t fully discovered,” says Leonora Bittleston. She’s a biologist at Boise State University in Idaho who did not take part in the study. There could be other underground pitcher-plant species that scientists just haven’t noticed yet, she says. “I think a lot of people don’t really dig down.”