Trey Lance should be given snaps with 49ers starters 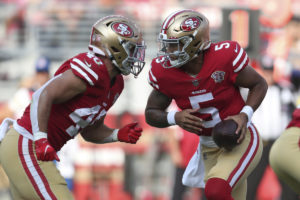 On Saturday night against the Kansas City Chiefs, Trey Lance made his NFL debut which also happened to be only his second football game since 2019. If there was any rust for Lance to knock off, it didn’t show. The rookie put his first NFL throw right between Brandon Aiyuk’s numbers but the receiver dropped it. Undeterred, Lance would make an even more impressive throw on his next attempt, hitting Trent Sherfield deep down the right side of the field for an 80-yard touchdown.

Lance’s performance in his NFL debut was a bit up and down which was to be expected, but there was no hiding his potential. And this was all without Kyle Shanahan utilizing the running ability of his young signal caller.

When head coach Shanahan met with the media on Sunday, he was asked what threshold Lance would need to surpass before Shanahan believes he needs to give the rookie quarterback more reps with the first team.

“I don’t know. I haven’t really defined that for myself either,” said  Shanahan. “Just when I think it feels right, and when he seems ready when I think the team seems ready.”

Let me help Shanahan out here. Lance is ready and the team is ready. In fact, Shanahan owes it to his team to give Lance the same number of reps with the starting offensive line as he is giving to Jimmy Garoppolo. Lance has earned it.

While watching Lance during training camp it became clear that he can do everything that Garoppolo can do in the 49ers offense as a passer. Lance has shown the ability to hit the checkdowns underneath to running backs and tight ends or the underneath crossing routes to wide receivers that Garoppolo thrives on.

Where Lance separates himself from Garoppolo is his willingness to push the ball down the field, and his ability to produce big plays with his legs.

While Shanahan chose to keep the running of Lance under wraps on Saturday night, the differences between the two quarterbacks were on full display. Garoppolo threw the ball four times during his one series of action, those four throws traveling a total of five yards past the line of scrimmage. On Lance’s first play in the NFL, his throw to Aiyuk traveled 15 yards down field. His next throw, 37 yards to Sherfield. This continued while Lance was on the field throughout the first half and into the third quarter.

While Lance is definitely going to push the ball downfield more often, getting him onto the field with the starting offensive line is all about continuing his development.

The 49ers second-team offensive line struggled to protect Lance on Saturday, resulting in three sacks and a number of hits on the quarterback. By keeping the starting offensive line on the field for a longer period with Lance, Shanahan will give the quarterback the opportunity to better see the field without being forced to play under duress. Even with the pressure up front, Lance has shown that he can make plays. He’s dominated the 49ers’ second-team defense on a regular basis during training camp practices.

Lance has been given a number of opportunities to work with the 49ers starting skill position players and Shanahan has already gone on record that Lance will definitely be playing this season. Moving that process forward and allowing Lance to get the same number of reps as Garoppolo with the starting offensive line will help get him ready for those situations and doesn’t have any negatives. If Lance struggles, these early reps will allow more time to iron out the wrinkles, and if he plays well the answer to the quarterback situation is there for everyone to see.

This isn’t about naming Lance the starter, yet.

Search more articles here: Trey Lance should be given snaps with 49ers starters

Read original article here: Trey Lance should be given snaps with 49ers starters