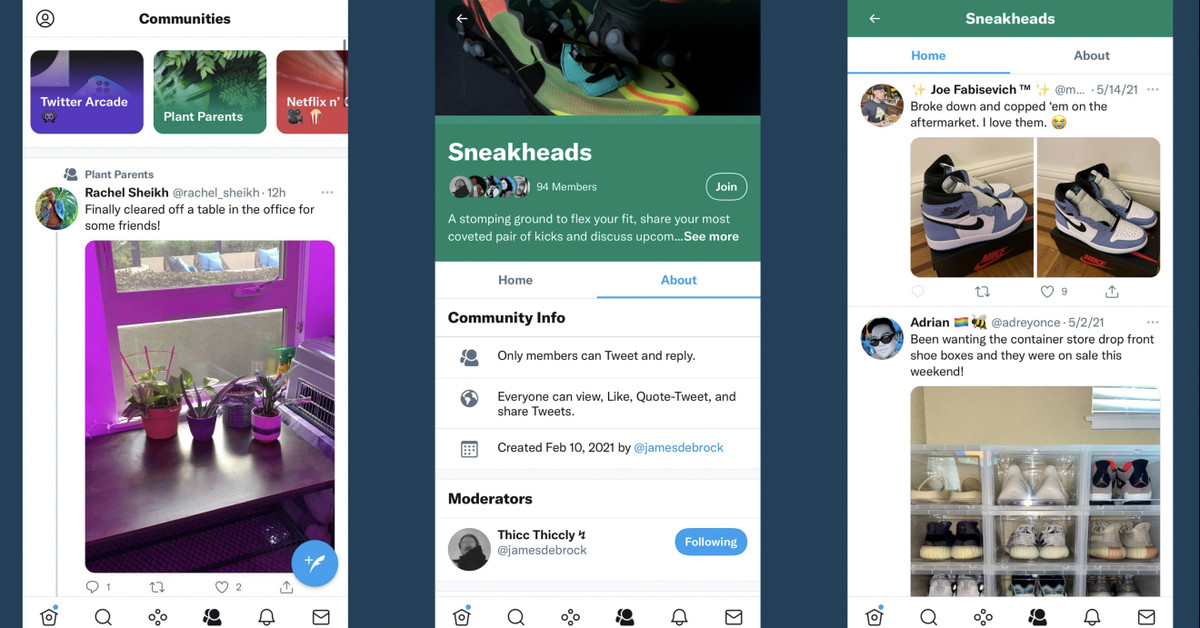 Starting Wednesday, Twitter users can be invited to an initial batch of Communities that include #AstroTwitter, #DogTwitter, #SkincareTwitter, and #SoleFood (a group for sneaker enthusiasts). Once people join a Community, they can tweet directly to other members rather than to just their followers. Only members of a Community can like or reply to tweets sent by other members.

Similar to how groups on Facebook and Reddit’s subreddits work, each Twitter Community will have its own moderators who are able to set rules and invite or remove people. Twitter invited a handful of users to create the first Communities and will let anyone apply to create their own on its website. “Communities are just invite-only for now, but we’re working on ways for people to discover and join Communities they want to be a part of,” the company said in a statement. That makes Communities harder to join than subreddits or public groups on Facebook. Twitter is also approving moderators to start.

Communities is a somewhat obvious move for Twitter, given that its users have long formed niche groups around specific interests, like media and crypto. Twitter is now formalizing that dynamic into a product that it plans to eventually put front and center on the main navigation bar of its mobile app.

Those who have access to Communities on iOS can access them through the tab on the navigation bar, while users on the web will see a Communities tab on the sidebar. On Android, you’ll only be able to read Community tweets for now — additional functionality is “coming soon,” Twitter says.

The feature could make Twitter more compelling for casual users

Twitter has long struggled with retaining people who come to it and don’t consistently find relevant tweets or accounts to follow. To help fix the problem, the company has in the past couple of years prioritized recommending topics, such as professional sports teams, to follow. If Twitter lets anyone create and easily promote their own Communities, the feature could make the app more compelling for casual users who haven’t put in the effort to heavily curate their main timeline.

Twitter first previewed that it was working on Communities in February during a presentation to investors, saying its goal was to make it “easier for people to form, discover, and participate in conversations that are more targeted to the relevant communities or geographies they’re interested in.” That implies Communities could also take on apps like Nextdoor by suggesting groups for people who live in a specific city or neighborhood.

Communities is the latest in a string of big product bets from Twitter over the last year, including its audio chat feature Spaces, paywalled tweets, and push into newsletter hosting.