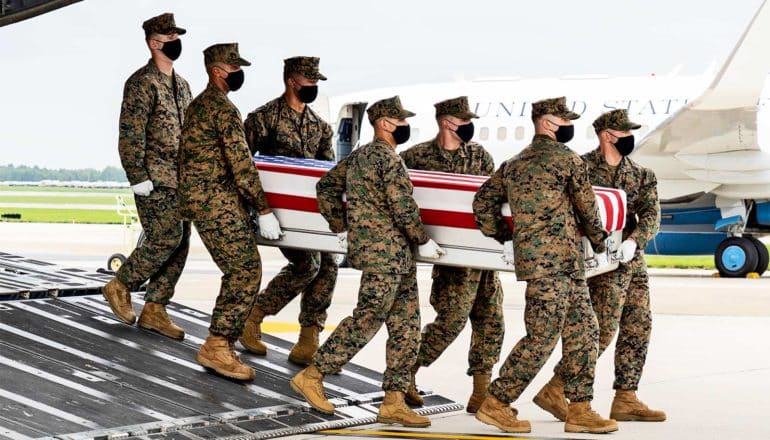 Nearly 20 years after the United States’ invasion of Afghanistan, the cost of its global war on terror stands at $8 trillion and 900,000 deaths, according to a new report.

The Costs of War project, founded more than a decade ago at the Watson Institute for International and Public Affairs at Brown University, released its annual report ahead of the 20th anniversary of the 9/11 terrorist attacks in New York City, Washington, DC, and Pennsylvania, the impetus for an ongoing American effort to root out terrorism in the Middle East and beyond.

“Twenty years from now, we’ll still be reckoning with the high societal costs of the Afghanistan and Iraq wars—long after US forces are gone.”

“The war has been long and complex and horrific and unsuccessful… and the war continues in over 80 countries,” says Catherine Lutz, co-director of Costs of War and a professor of international and public affairs at Brown.

“The Pentagon and the US military have now absorbed the great majority of the federal discretionary budget, and most people don’t know that. Our task, now and in future years, is to educate the public on the ways in which we fund those wars and the scale of that funding.”

The research team’s $8 trillion estimate accounts for all direct costs of the country’s post-9/11 wars, including Department of Defense Overseas Contingency Operations funding; State Department war expenditures and counterterror war-related costs, including war-related increases to the Pentagon’s base budget; care for veterans to date and in the future; Department of Homeland Security spending; and interest payments on borrowing for these wars. The total includes funds that the Biden administration requested in May 2021.

The death toll, standing at an estimated 897,000 to 929,000, includes US military members, allied fighters, opposition fighters, civilians, journalists, and humanitarian aid workers who were killed as a direct result of war, whether by bombs, bullets, or fire. It does not, the researchers note, include the many indirect deaths the war on terror has caused by way of disease, displacement, and loss of access to food or clean drinking water.

“The deaths we tallied are likely a vast undercount of the true toll these wars have taken on human life,” says Neta Crawford, a co-founder of the project and a professor of political science at Boston University. “It’s critical we properly account for the vast and varied consequences of the many US wars and counterterror operations since 9/11, as we pause and reflect on all of the lives lost.”

The report comes at the end of a contentious US withdrawal from Afghanistan, where Taliban insurgents captured every major city and seized governmental control as American military units worked to extract 123,000 troops, diplomats, and allies. Of the $8 trillion, $2.3 trillion is attributed to the Afghanistan/Pakistan war zone, according to the report.

In an address to the nation on Tuesday, August 31, President Joe Biden cited Costs of War estimates to convey the financial and human burden of the 20-year war in Afghanistan as he defended his decision to withdraw from the country.

“We no longer had a clear purpose in an open-ended mission in Afghanistan,” Biden said. “After more than $2 trillion spent in Afghanistan, costs that Brown University researchers estimated would be over $300 million a day for 20 years—yes, the American people should hear this… what have we lost as a consequence, in terms of opportunities? …I refuse to send America’s sons and daughters to fight a war that should have ended long ago.”

Even as the US exits Afghanistan, Costs of War estimates show that Americans are far from done paying the bill on the war on terror, which continues across multiple continents. The cumulative cost of military intervention in the Iraq/Syria war zone has risen to $2.1 trillion since 9/11, and about $355 billion more has funded military presence in other countries, including Somalia and a handful of African countries.

And when the wars do end, the costs of war will continue to rise, the report notes: A towering $2.2 trillion of the estimated financial total accounts for future care that has already been set aside for military veterans, the researchers say, and the US and other countries could pay the cost of environmental damage wrought by the wars for generations to come.

“What have we truly accomplished in 20 years of post-9/11 wars and at what price?” says Stephanie Savell, co-director of the Costs of War Project and a senior research associate at the Watson Institute. “Twenty years from now, we’ll still be reckoning with the high societal costs of the Afghanistan and Iraq wars—long after US forces are gone.”

The post US war on terror has cost $8 trillion, 900,000 lives appeared first on Futurity.