What’s behind the Yom Kippur tradition of chicken twirling? 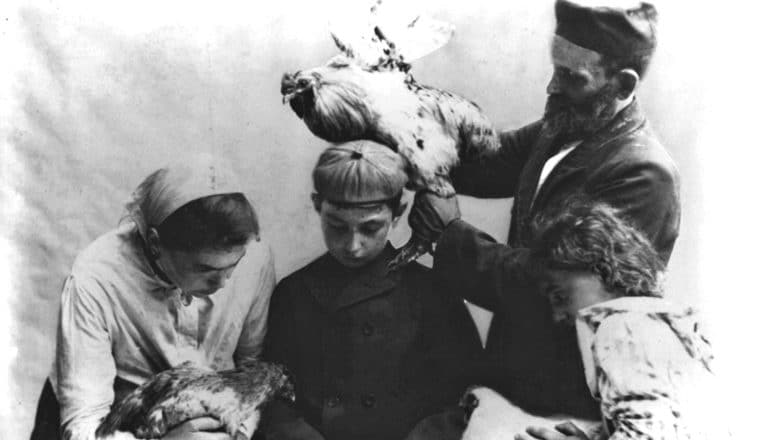 For some 1,000 years, many Ashkenazi Jews have observed the same ritual every Yom Kippur Eve—waving a chicken over their head.

The practice is called kapparot (atonements) in Hebrew and “shluggen kappores” in Yiddish. Shluggen means beating or hitting, which is not what the ceremony entails, but probably what it feels like to the chicken.

“Whenever you move and get your body involved in the act of worship, it reverberates more than just words.”

From the start, the practice was controversial among rabbinical scholars, and even today, it continues to ruffle feathers.

According Reuven Kimelman, professor of classical rabbinic literature at Brandeis University, kapparot involves swinging a living chicken three times around your head while reciting a prayer. Traditionally, men use roosters and women hens, though pregnant women use both in case they’re having a boy. After the ceremony, the animal is slaughtered according to Jewish law.

Who would do such a thing to a chicken?

It’s primarily a Hasidic tradition. This makes it relatively uncommon today among Jews, but in 19th-century Eastern Europe almost half the Jewish population identified as Hasidic, and the practice was widespread.

How did it start?

No one is sure. It’s not mentioned in the Torah or Talmud. The first reference appears in the 9th century in a responsa, a kind of question-and-answer session, with the scholar Amram ben Sheshna. As head of a revered Babylonian academy, Sheshna was considered a great sage, but when asked about kapparot’s origin, he says, “For we do not know.”

Historians believe it probably began several centuries before Sheshna’s commentary and then became widespread, requiring the rabbis to devise an ex post facto explanation. Sheshna says it derived from a practice in the ancient temple, where a goat bearing the sins of the people was sent into the wilderness to die. But after the destruction of the Temple, Jews were prohibited from carrying out the practices once done there. Sheshna says kapparot was a convenient workaround with another animal.

But why a chicken?

Yom Kippur is the day when God decides whether you will live or die based on your and others’ sins. As it happens, the word for rooster is gever, which can also mean man. Kimelman says this made it possible to see the chicken as a stand-in for a human being (in addition to being a stand-in for a goat). The practice could potentially save your life, it was believed. As the kapparot prayer states, “And may this rooster go on to death so that this person may remain alive.”

What happened to the dead chicken?

In the Middle Ages, its entrails were tossed on the roofs of houses for other animals to devour. According to the 20th-century scholar Jacob Lauterbach, this appeased Satan, who was believed to dwell on rooftops and apparently really liked raw chicken.

In his 2011 book, The Shtiebelization of Modern Jewry, the scholar Simcha Fishbane claims that tossing the entrails was done for the exact opposite reason. Rabbis worried that kapparot would feed antisemitic tropes about Jews engaging in magic or sorcery. Bird remains left outside would be quickly devoured by insects and other animals, making it impossible for Gentiles to gather any incriminating evidence.

Jews later started donating the chicken to charity. Kimelman says it counted for one last good deed before God decided your fate on Yom Kippur. A chicken may not sound like a big deal to us today, but according to Kimelman, a common joke among Jews went, “If a Jew eats a chicken, one of them must be sick.” This meant either the chicken was ill, so it was cheap and a Jew could afford it, or the Jew was unwell and only a hearty chicken meal could save him or her.

Today, the chicken is often eaten on Sukkot.

Many rabbis believed it was akin to magic and idolatry. On Yom Kippur, Jews are supposed to ask God for forgiveness. You aren’t supposed to let a chicken take the fall for you.

Today, kapparot runs afoul of animal rights activists, who argue it’s inhumane; they have sued in court and supported laws to stop the practice. With some 50,000 chickens killed every year in New York City for kapparot, protesters tried in 2019 to get the ceremony halted. Instead, city health department officials says kapparot posed no public health threat and was important to Jewish community members.

About a decade ago, Kimelman gave it a try. “If I’m teaching about something, I want to know what I’m talking about,” he says. He found the experience unnerving and emotional. “Whenever you move and get your body involved in the act of worship, it reverberates more than just words,” he says. “This is especially the case before the Day of Judgment when one’s life hangs in the balance.”

The post What’s behind the Yom Kippur tradition of chicken twirling? appeared first on Futurity.