Not a great morning for Theresa May…but then there probably hasn’t been one of those since she called her ill fated snap election.

The Politico playbook sums up the Cabinet problem nicely, with a quick round-up of all the problems currently sitting round Mrs. May’s cabinet table.

Then Ian Dunt in politics.co.uk suggests that there is no longer any such thing as a single, co-ordinated British foreign policy, given the apparent free hand being taken by Boris Johnson, Priti Patel and Liam Fox.

Meanwhile James Kirkup in the Spectator blog mercilessly dissects Priti Patel’s “clarification” statement, while the Speccie itself concludes that “This may be one of the worst messes ever created by a Cabinet minister”, in reference to Boris Johnson’s appalling mismanagement of imprisoned Nazanin Zaghari-Ratcliffe. Over at the Times, Matthew Paris is no less sparing….. 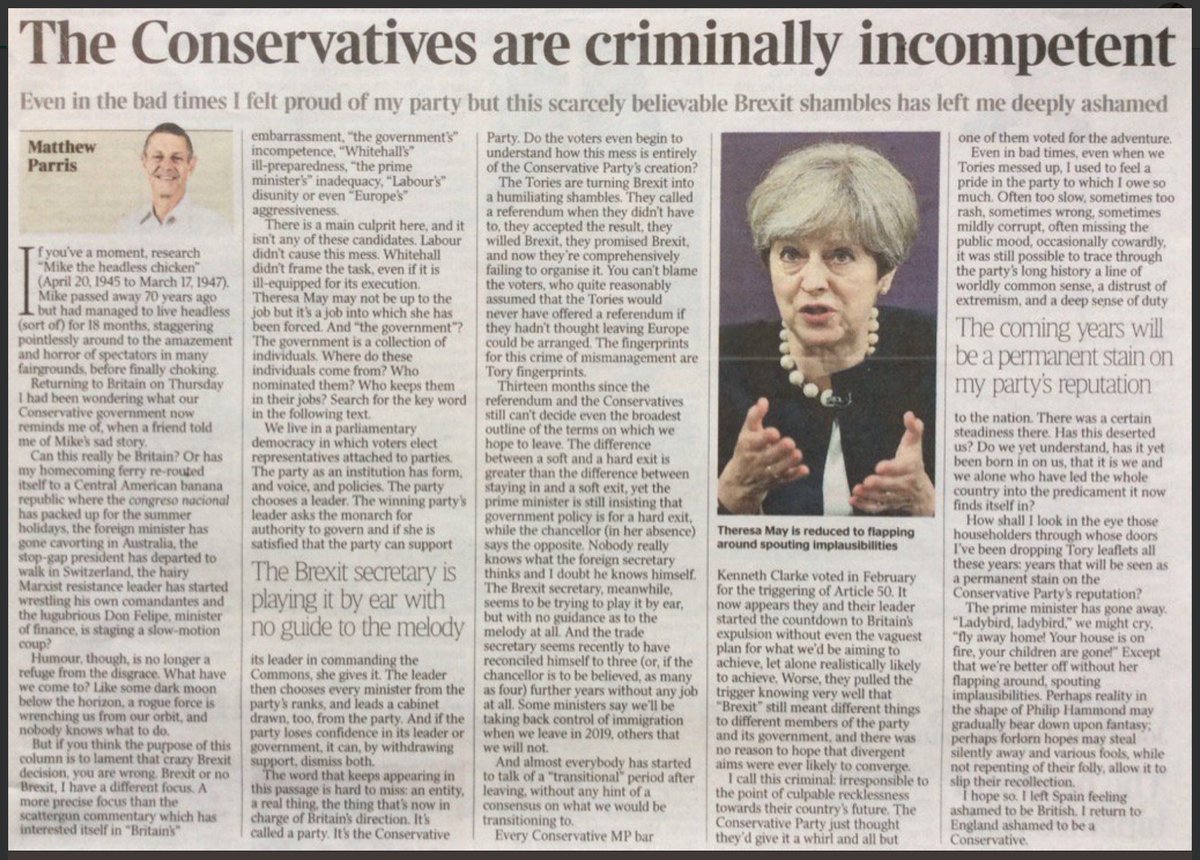 There’s a general trend on twitter comments about all of this, which goes broadly along the lines of “who the f*** is in charge?”.

Boris Johnson – a charlatan and narcissistic fraud known to be such when appointed as Foreign Secretary by Mrs. May – has gone some way to demonstrating with his words the utter fallacy of those once proud comments in the British passport that “Her Britannic Majesty’s Principal Secretary of State for Foreign and Commonwealth Affairs Requests and requires in the Name of Her Majesty all those whom it may concern to allow the bearer to pass freely without let or hindrance, and to afford the bearer such assistance and protection as may be necessary.”

Turns out that Mr. Johnson’s efforts effectively increase the let or hindrance afforded to unlucky British citizens. [There is an irony here in that anti-EU activists years ago opposed the EU style passport on the grounds that it might mean the end of the unique protection offered by Britain to its citizens. It has taken a vigorously anti-EU foreign secretary to illustrate the falsity of those sentiments].

Priti Patel has long been over-rated by admirers on the Brexit right, and her arrogant attempts to pursue her own foreign policy agenda in Israel, and with such incompetence, have illustrated the sharp limits of her political ability.

Liam Fox was admitted back into the Cabinet by Mrs. May despite having once resigned in disgrace (and yet another irony here, as he is the man going round the media studios today posing as the man of probity while he takes swipes at his Brexit ally Ms. Patel). As Dunt’s article shows, he too has no qualms abut pursuing his own independent line of policy, despite possessing a seeming slight grasp of trade realities.

Where to look for the origin of these problems?

In truth, and sadly, it is Mrs. May herself. A competent enough Home Secretary, albeit one with numerous controversies to her tenure, she has proved over-whelmed by the office of prime minister. Arriving there as much by luck than judgement, and over the flaws of her opponents more than the strengths of herself, she presides over a calamitous catastrophe of failed governance.

Her person judgement is poor – not just the afore-mentioned foreign policy team, but special advisers, the new Defence Secretary, David Davis, all bespeak an inability to select the good from the bad or mediocre.

But more significantly she herself has created the conditions for her current powerlessness. First, she pandered too much to the Brexiters in her party, perhaps to over-compensate for her own admittedly lukewarm Remain sympathises during the referendum, giving them a sense of entitlement about the outcome of the Brexit negotiations. Second, her election misadventure – from its very calling to her own poor stump performance – fatally undermined both her reputation and her authority.

A minority government does not, per se, need to be weak. A tight grip from the centre, a sense of strategic vision shared by the whole government, and a willingness to exercise discipline against erring ministers. These are not superhuman requirements. They are the basic requirement for clear governance, and they are all currently lacking in the present government. The buck long ago stopeed at Number 10.

New Secret Video Has been Released on Internet

WHY DO BUGS OCCUR

Nicaragua doesn’t recognise the PRC, yet it supports the PRC’s

Who is “Indian” in the Gulf? Race, Labor and Citizenship

And the first ever Home Cheffies award goes to …