why these jumping toadlets get confused mid flight

Why these jumping toadlets get confused mid-flight 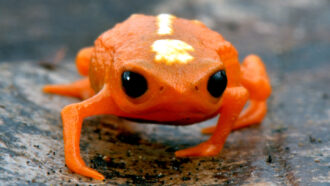 After leaping, pumpkin toadlets tumble through the air as if flung by a toddler. They roll, cartwheel or backflip and then plummet to the ground. Often they end up belly flopping or crash-landing on their backs.

“I’ve looked at a lot of frogs and these are the weirdest things I’ve ever seen,” says Richard Essner, Jr. He’s a zoologist. He works with vertebrates — animals with backbones — at Southern Illinois University Edwardsville.

Essner and his colleagues now propose an explanation for why the tiny frogs are such clumsy jumpers. It appears the animals lack the internal equipment needed to sense small changes as they rotate. The team described its new analysis June 15 in Science Advances.

Watch Brachycephalus pernix frogs leap into flight. Unfortunately, these tiny animals have a hard time figuring out how to land feet-first. A new study thinks this problem might trace back to structures in their inner ears.

When Essner saw videos of the pumpkin toadlet’s awkward aerial maneuvers, he was shocked. So shocked, in fact, that he hopped on a plane to study the animals as part of a research team in Brazil. The frogs’ scientific name is Brachycephalus (Brack-ee-seh-FAAL-us). Small as your thumbnail, they can be tricky to find in the wild. Scientists listen for their high-pitched, buzzy calls. Then they scoop up leaves in the area, hoping to nab a few toadlets in the process.

In the lab, the team used high-speed video to record more than 100 tiny frog jumps. The klutzy tumbles suggest these toadlets had an issue tracking their bodies’ motion.

Typically, fluid sloshing through bony tubes in the inner ear helps animals sense their body’s position. The pumpkin toadlet’s tubes are the smallest ever recorded for an adult vertebrate. Other studies had shown that the tiny tubes don’t work all that well. Their fluid has a hard time flowing freely, Essner says. If the frogs can’t sense how they’re twirling through the air, he reasons, they might find it tough to prep for landing.

It’s possible that bony back plates may offer some toadlets a bit of crash protection. But these animals may just stay grounded for safety. As Essner observed, these frogs are “almost always crawling really slowly.”

Most people in the United States have some degree of immune protection against Covid-19, either …