While the rest of Hollywood’s elite feted at the Venice Film Festival in Italy over the weekend, Zendaya took to the red carpet in Paris to show off not one but two amazing two-piece sets while promoting her new movie, Dune. Ever the queen of the carpet, Zendaya’s looks prove that wearing an actual gown is officially out—and that two-piece sets are the way to go from here on out.

At the Dune premiere in Paris, Zendaya showed us all the true meaning of a best-dressed celeb in a maroon two-piece set by Alaïa. If the piece looks familiar, that’s because it was just shown on the runway as a part of the legendary brand’s Winter/Spring 2022 collection. She accessorized her look with a pair of heels by Jimmy Choo and a pair of oversized gold hoops.

Her ensemble was comprised of a—completely backless—long-sleeved crop top and a long fitted skirt outfitted with Alaïa’s signature laser-printed cut-outs along the waist and tons of dramatic feathers at the hem. While this was definitely one of Zendaya’s more daring looks, she pulled it off with ease. I mean, has she ever not been able to pull off a look on the red carpet? She tops nearly every best-dressed list for a reason, after all! 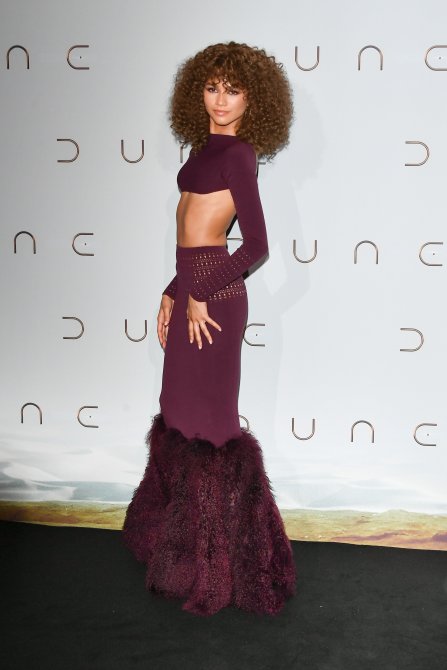 The Euphoria star and EMMY Award-winning actress collaborated with Law Roach on the look. Roach, a self-proclaimed “image architect,” has worked with the star since her days on the Disney Channel and the duo has created all of Zendaya’s most amazing looks over the course of her career.

It was actually Roach who debuted the Alaïa’s look on Instagram. He posted a video to his feed of Zendaya walking through her hotel lobby in the ensemble while a cover of Beyonce’s “Grown Woman” played in the background.

‘She’s a grown woman… @wearing @maisonalaia and @jimmychoo” he captioned the video. Keeping with the ‘70s-inspired vibe, Zendaya’s hair was coiffed into a curly bob. Her makeup, although subtle, featured glowy highlighted skin, black double-winged eyeliner with a pop of white at the outer corner and a glossy nude lip. When the dress is this over-the-top, why complicate it with an exaggerated beauty look?

But Zendaya’s Dune premiere looks didn’t begin and end with Alaïa—she changed into another two-piece set later on in the evening. This second look, which was designed by David Koma, came in black instead of maroon and featured a thick bedazzled band across the top of the skirt and the bottom of the long-sleeved crop top. Again, it was Roach who shared the first video of the look to his Instagram page. “We can do this all day….. wearing @davidkomalondon,” he captioned the second video. This time around, the actress’s hair was fashioned into several sleek braids that came together into a low bun at the nape of her neck. If the maroon Alaïa set was inspired by the disco glam fashion of the ’70s, this second look was inspired by the full-on maximalism of the ‘80s.

Excuse me while I try to think of a time when Zendaya wasn’t winning on the red carpet. If anything, these most recent looks cement the star as one of the best-dressed celebs of the decade. And considering the fact that her red carpet appearances get better and better with time, I simply can’t wait to see what she and Roach come up with next.